On a recent trip to Andalucía we had decided to make Seville our first destination. I’d heard great things about this city and was looking forward to seeing it for myself. With so much to offer it didn’t disappoint! We arrived into Madrid after our overnight flight from the west coast of Canada via Paris. After making our way to the Atocha train station in Madrid we boarded a train to Seville. We hadn’t pre-booked a train ticket so ended up paying for a premium first class seat. It was a bit pricey, but included larger seats, drinks, and a meal…and after our flights we just wanted to get to our destination and begin our time in Andalucía! We got to our Airbnb apartment near the Seville Cathedral and settled in for our four night stay in Seville.

The first day we found a great breakfast spot close to our Airbnb in the Barrio de Santa Cruz area of Seville. This is a great area to stay as there are lots of restaurants and bars nearby, plus it is walking distance to the major sites of Seville. It was raining a bit so this was the perfect day to check out Seville Cathedral, the third largest cathedral in the world. We went to El Divino Salvador Church first and bought a combination ticket for both this church and the cathedral. This is a great idea as not only is this church absolutely magnificent on the inside, but you then get to bypass the lines at the Seville Cathedral.

After spending some time at El Divino Salvador we wandered through the streets to Seville Cathedral. The Seville Cathedral was actually a 12th century mosque and when Seville fell to the Christians in 1248 it was converted into a church and later rebuilt in 1502 to the immense size it is today. 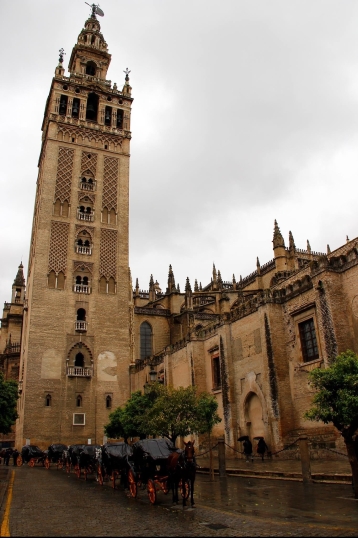 The cathedral is famous not only for its size and wonderful gothic architecture, but also for the tomb of Christopher Columbus which is found here.

We spent quite a bit of time here gazing at the paintings, the sculptures, and the detailed architecture that is all around. Don’t forget to look up as the ceilings and doorways are also extremely ornate. We climbed up La Giralda, the tower that you can enter from the church, and got some amazing views of the courtyard and the surrounding city.

The next day it was time for the Alcazar. The Alcazar was originally built as a fort in the 10th century, a palace was added in the 11th century by Muslim rulers, and in the 13th century it became a residence for Christian monarchs. This spectacular site really wowed me.

Not only is the Alcazar gorgeous inside with its Moorish architecture and intricate detail, but the surrounding gardens filled with fountains and pools and greenery are just as stunning. 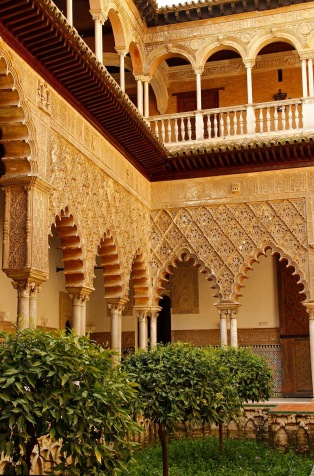 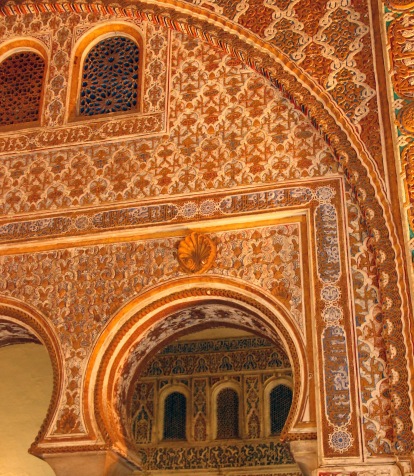 We spent the better part of a day here being absolutely amazed by its beauty. This ceiling was built to represent the universe and the sight of it is awe-inspiring!

You can pre-purchase tickets which I would recommend during the summer, but as we visited during the spring we had no problem getting in.

After leaving the Alcazar we hopped on a horse-drawn carriage and headed to Plaza de Espana built for the 1929 Expo. This site is big! There is a canal, a fountain, and murals depicting the different regions of Spain. Great photo ops too!

That evening we headed to Metropol Parasol which opened in 2011 and is the largest wooden building in the world. It has an interesting honeycomb-like roof and the walkways that meander on the rooftop give stunning views of the city. We went at night to catch the evening light. 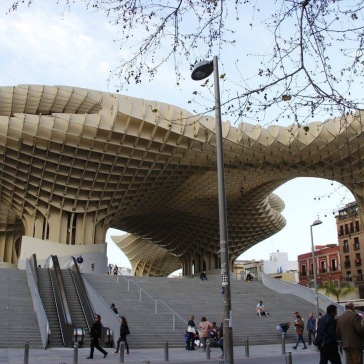 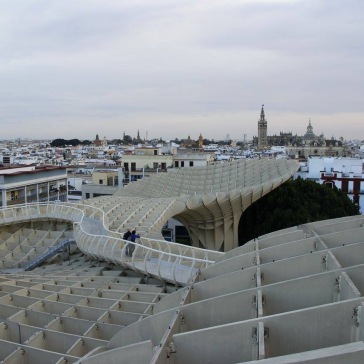 Our third and last day in Seville we wanted to do some shopping and just enjoy walking along the streets and discovering the many hidden squares that this city has.

We also walked past the bullring and along the river where you can see the area of Triana on the other side and also view the Torre del Oro or Tower of Gold which was used as a watchtower in the 13th century.

We would have liked to have had one more day in Seville to perhaps take a day trip to Cadiz, but three days in Seville were barely enough to soak up some of the sights this city had to offer. It was time to move on to Ronda, one of the “white hill-top towns”, so after spending 4 nights in Seville we got a morning bus to Ronda and enjoyed a day of exploring this city before catching an afternoon train to Granada.

To read more about Andalucía check out my blogs on Granada and Cordoba.

3 thoughts on “Four Days in Seville…”