After spending time in Seville and making our way to Ronda for the day, it was time to enjoy the city of Granada. We booked ourselves into an Airbnb for 4 nights and filled our days with sightseeing and exploring. We arrived at the train station late in the evening and got a cab to Plaza Nueva which was near our Airbnb in El Albayzin (the Albaicin) district of Granada. This was our view in the evenings from our Airbnb!

The Albaicin is the perfect area to stay in Granada as it is within walking distance to sites and shops, and is surrounded by restaurants and cafes. There are also buses and cabs close by if you feel like catching a ride somewhere. Our first morning we exchanged vouchers that we had ordered online for our Granada Cards. These cards are a great deal and I would highly recommend purchasing them. They allowed us bus trips and entries into sites, including the Alhambra, Nasrid Palaces, Generalife, Granada Cathedral and the Royal Chapel. It also included a free hop-on hop-off tourist shuttle which we found was a great way to get our bearings. We had no problem exchanging the vouchers in Plaza Nueva and hopped on the shuttle right away. Our first stop after our ride was the Granada Cathedral, the second largest cathedral in Spain.

This cathedral, completed in 1704, is a combination of styles including Baroque, Renaissance, and Gothic. The inside is stunning with massive columns, a gorgeous altar and an impressive dome. With your Granada card you get free headsets which helped us learn more about the history of this chapel and all the art pieces inside it. 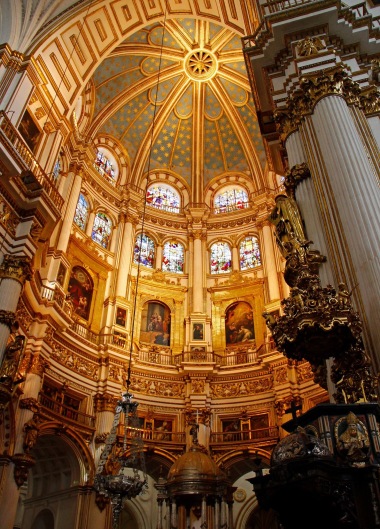 One thing to keep in mind…there will be women in this area trying to get you to take rosemary sprigs from them. Just smile and say “no thank you” because if you take it from them they will then expect some money from you.

After grabbing some lunch in a nearby plaza we explored the Alcaiceria, which was originally a Moorish silk market. This maze of small alleys is filled with souvenirs, trinkets, t’shirts, lanterns, leather goods, and just about anything you could want to buy. We then continued our walk along Carrera Del Darro beside the Darro River with the Alhambra towering above the hill on our right.

Our destination was San Nicolas viewpoint to see the Alhambra in the afternoon light. The view of the Alhambra with the Sierra Nevada mountains was unbelievable and definitely worth the climb up the hilly streets!

After winding our way back down the cobbled streets it was time for dinner. Granada has no lack of choices when it comes to restaurants, and no matter what time it was, we were always able to find something to satisfy our hunger.

The next day it was time to head to the Alhambra. This fortress dating back to the 13th and 14th centuries, is an absolutely magnificent Moorish palace filled with ornate details, vibrant colours, and peaceful gardens with water features throughout. We had pre-booked our entry time for the Nasrid Palaces for the morning and I would highly recommend this, not only because you will spend the better part of a day at the Alhambra, but the morning light gave the buildings a golden glow.

Guidebooks recommend 3 hours at the Alhambra, but we spent 6 hours and could have stayed longer!! The sheer size of the complex with all the buildings and outside areas is something to keep in mind when planning your visit. Getting an early entrance time to the Nasrid Palaces allowed us the rest of the day to wander the other areas that include, the Alcazaba, the Partal, and the Generalife. Take time to enjoy the Nasrid Palaces with its carved ceilings, ceramic tiled walls and splendid courtyards. There is no need to rush now that you have entered this area. 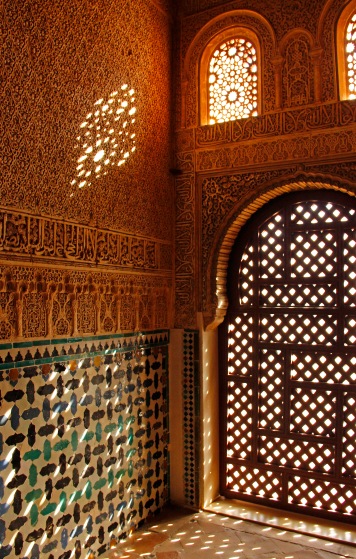 Grand Hall of the Ambassadors

Once you are back outside wander over to the Alcazaba, one of the oldest parts of the Alhambra that was used as the military area. Climb the Watch-Tower to get a spectacular view of the Alhambra and the city of Granada below.

Head back to the Partal Gardens where the ruins of the Partal Palace once stood. This is a lovely area to just sit and relax for awhile, and consider that this was once a city of 1000 people with walls surrounding it and 30 towers.

Grab some lunch at one of the restaurants and then walk over to the Generalife. This area of the Alhambra was used by the Moorish rulers as a summer garden retreat with orchards, flower beds, and fountains. The lower gardens were originally planted over 600 years ago and were considered to be the closest thing to heaven on earth according to the description in the Quran.

This was the perfect place to end our time at the Alhambra. Although visiting the Alhambra in March meant that it wasn’t very crowded, I do think it would be lovely to visit during the summer season to see the gardens alive with colour!

We started our last day in Granada with a visit to the Royal Chapel. This chapel houses the tombs of Queen Isabella and King Ferdinand.  The tombs are situated in the center of the chapel, but you actually step downstairs to view the actual coffins. No picture taking is allowed in this chapel as it is a very solemn and respected Christian site.

We then walked up a nearby street called Calle Caldereria Nueva that has numerous souvenir stores and small tea shops where you can sit by a window overlooking the cobble-stoned street and enjoy crepes and a cup of tea, you can also rent a hookah with fruit flavoured tobacco. A taste of Morocco in Spain!

After our tea we caught a bus up to the Abbey of Sacromonte for stunning views of the city below. The abbey is definitely a bit remote compared to other tourist attractions in Granada, but it is included with your Granada Card. The abbey is only open during certain times and the tours are in Spanish, but we did find out that this 17th century abbey contains the catacombs where St. Cecilio, the first bishop of Granada, was martyred.

We wandered back through the Sacromonte area to the Albaicin enjoying the views and grabbing some dinner in one of the plazas beside the Dorro River. That night it was time to pack up and get ready for our next destination…Cordoba.

Granada has so much to offer and you could easily spend 4 or 5 days enjoying the city and its sites. With more time you could do some hiking in the countryside or head down to a beachside town for the day. Granada stole my heart and it is a definite must-see in Spain!!