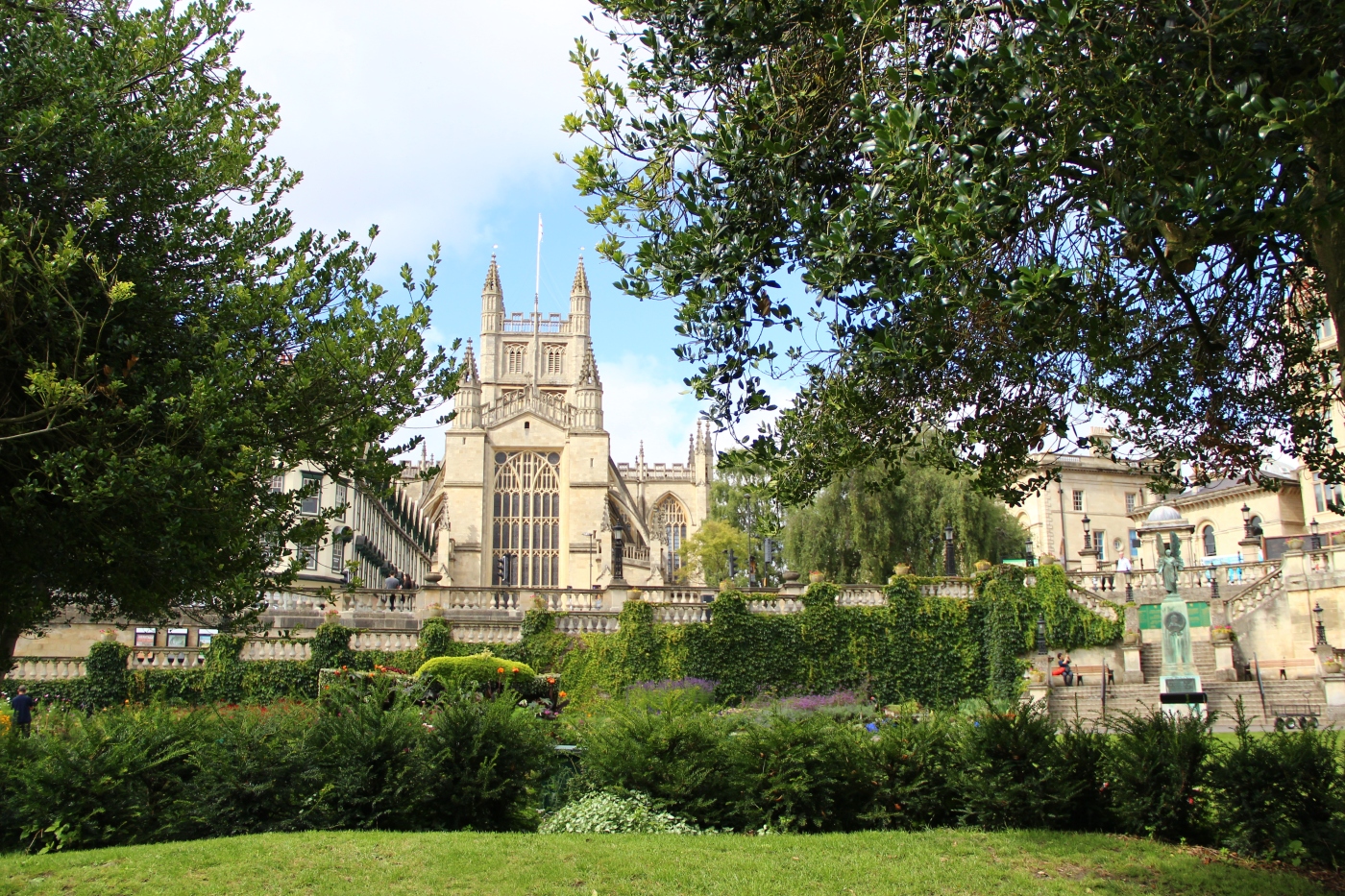 On a recent trip to England I spent a few days solo in the city of Bath. I wanted a city that had lots of sites to explore and was easy to get around. I was also looking for a town that had good train service as I was coming from northern England and heading down south. After doing some research and talking to a few people, the city of Bath was where I decided to spend my time….and it was perfect! Bath is mainly known for its imposing cathedral and its Roman Baths, so let’s start with those.

The Bath Abbey was originally a Benedictine monastery that was built in the 7th century.

Over the years the church was ravaged by fire, as well as destroyed in parts by rebellions that took place. In the mid 1500’s when monasteries were dissolved by King Henry VIII, Bath’s cathedral was stripped of much of the interior. Later in that century, restoration work began, but it wasn’t until the 1800’s that the magnificent flying buttresses were added to the exterior.

Inside, the interior is still undergoing renovations, with parts of the floor being redone because of the ledgerstones collapsing. This also brings with it exciting new discoveries as artifacts below the surface are being unearthed, including a tiled floor from the 1300’s. The stained glass windows of the abbey are spectacular and there are plenty of memorials to see both on the walls and on the floor.

The abbey is now an Anglican parish and you are welcome to take part in their services, which include an evening choral-song. Right next to the abbey you’ll find the Roman Baths. I wrote about that site in a separate post that you can find here, however it is worth mentioning to plan your visit there either early in the morning when they first open, or later in the evening when the bus tours have left.

Wandering around Bath is so easy. Staying in the centre area of the city is definitely recommended so that you are close to the tourist sites, restaurants, and also transportation. One morning I decided to do a bit of walking, so I headed up the hill to the “crescent”. I first walked to the Circus, which is a group of three townhouse blocks, with a large park area in the middle. It was built in the 1700’s, with each row on the buildings being of a slightly different style.

Continuing up the hill I reached the Royal Crescent. Again built in the 1700’s these 30 townhouses are known to be one of the best examples of Georgian architecture in England. The name “royal” may have been added in the late 1700’s when Prince Frederick stayed there. Made of the Bath stone, it has that lovely golden colouring.

Heading back down the hill I walked through Victoria Park…

and then over to the Roman Baths before it got too late in the day. After visiting there it was time for some shopping. Bath has no shortage of shopping areas, from wide pedestrian malls to smaller designer shops tucked into alleyways.

If you don’t want to walk to all the sites then the Hop-On Hop-Off bus is the way to go. I must admit I have a bit of a soft spot for these tour buses. Giving you the option to get off where you like and then carry on to another location just seems like the perfect way to get around…big plus…the views from the top seats are fantastic! You can find the main hub for these buses right outside of the Bath Tourism Office, which is one of the best I’ve ever been to.

If you decide to take this tour then make sure that Prior Park is one of your stops. This park, located just outside of the city, has a natural setting with expansive city vistas and pathways leading up and down the small valley. There is also a coffee shop and lots of areas to sit and enjoy views of the surrounding countryside.

One of the best things to do in Bath is just stroll around and enjoy it. There really is something about the way the sunlight shines on the buildings that is just dreamy.

Head down to the River Avon to see the weir and the Pulteney Bridge, most likely modeled after similar bridges in Florence and Venice. You can stroll along both sides of the river here, which in the evenings is so peaceful with many of the day tourists from London having headed back to the big city.

Another thing to do in Bath is wander outside of the city into the lovely countryside that surrounds it. I gave the Bath Skyline Walk a try. You can read about my adventure at this link. Being so close to the beautiful countryside was amazing!

If all the walking and fresh air has made you tired and in need of some relaxation then head to the Thermae Bath Spa. This spa uses naturally heated spring water to heat its pools, and along with steam rooms, an infrared room, showers, and aromatherapy, it is the perfect way to unwind. There are 42 different minerals in the water, which are thought to improve wellness and cure illnesses. The spa provides you with towels, slippers, and lockers to keep your belongings, and there is also a restaurant where you can enjoy a bite to eat.

One of the benefits to a few days in Bath is the close proximity to other villages and places to explore. From tours of the Cotswold (which I did and highly recommend…click here), to Wells Cathedral, to Stonehenge, you won’t be lacking for things to do. Although I haven’t visited many cities in England, I would have to say that Bath is definitely one my favourites! and I’m sure you will feel the same after a few days spent here.

11 thoughts on “Meandering around Bath”