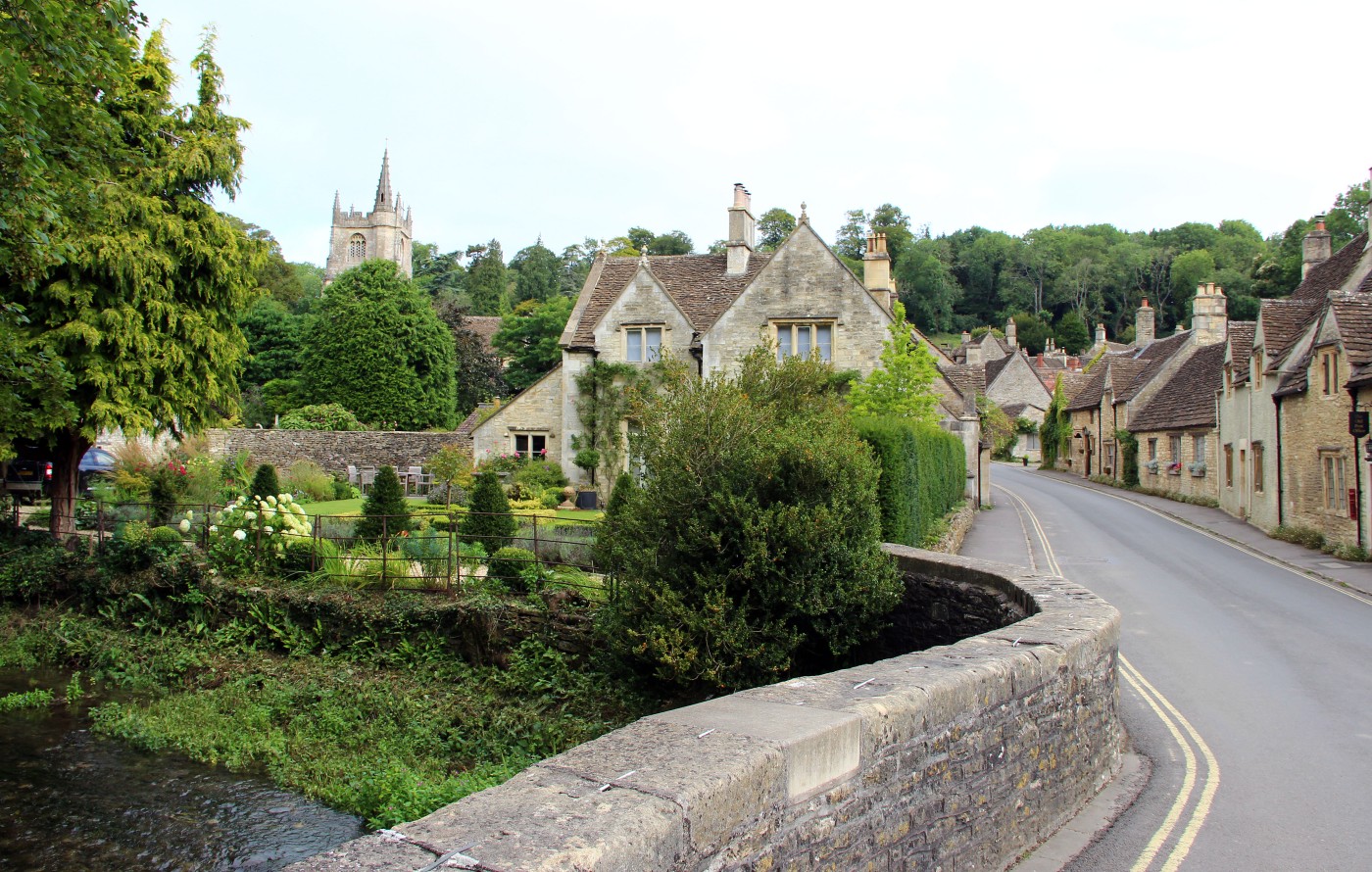 When planning a trip to England, an area called The Cotswolds often comes up as a place to visit. This part of the country is filled with rolling hills, green pastures, stone fences, and quaint villages. While staying in Bath I took a bus tour of some of these villages and was totally charmed by the character they each have. The Cotswolds area used to be known for its wool and weaving, however nowadays the sheep are often raised for their meat and not their wool. The name “cotswolds” may have even come from the two names “cots” and wold”, with “cots” meaning a bed for sheep in the winter, and “wold” a hilly or wooded area. Leaving Bath our first stop was Castle Combe.

We had arrived here early and so had the town to ourselves which was lovely. This is definitely the thing to do if there are villages you want to see without a high number of other tourists. The Cotswolds are designated an Area of Outstanding Natural Beauty and cover 787 square miles with many walking paths between the villages.

Our next stop, Malmesbury, is the oldest continually inhabited town in England. Some remains from an iron age fort date this city back to around 500 BC. The imposing Malmesbury Abbey sits on the hill here and was built in the 7th century during the Saxon period.

After spending some time in Malmesbury, and wandering through the abbey and the streets here, we drove through Cirencester to Stow-on-the-Wold, perhaps one of the most well-known of the Cotswolds villages. Stow-on-the-Wold is the highest city in the Cotswolds and is situated at the junction of seven roads. When wool production was at its peak up to 20,000 sheep would be sold during the annual fair held here.

Today this cute town is filled with tea houses, restaurants, and stores for the many tourists that come to spend some time here.

The north doors of St. Edward’s Church here are famous for possibly being the doors that inspired J.R.R. Tolkein’s “Doors of Durin” in the Lord of the Rings series…true or false they are impressive, and lend themselves to great photo ops!

Continuing on our way we stopped in Bourton-on-the-Water. As it was getting later in the afternoon the number of tourists was increasing at each stop we made. Another famous Cotswold village, Bourton-on-the-Water was very picturesque and I imagine that earlier in the day it would also be a lot more peaceful.

One thing I did notice, that our tour guide had mentioned, was that as we headed farther north in the Cotswolds the stone used for the buildings was becoming more golden-orange in colour. This difference in colouring, from the greyer stone in the south to the more orange stone in the north, depends on where it was quarried from. This stone is not only used for the buildings, but also for the stone fences, which as made them extremely long-lasting.

Our last stop to get out, wander around, and take pictures of, was Bibury. Also voted one of the most scenic villages in the Cotswolds, this small village should not be overlooked. The main attraction is Arlington Row, a line of weavers cottages next to the River Coln.

There is also a lovely park, and beautiful cottages to admire. It wasn’t too crowded here, which gave it an appeal some of the more visited places lacked. The gardens were stunning, and the colours and variety of flowers were certainly impressive.

We saw a lot of villages in one day, and I’m glad that I did the tour as I didn’t have time to stay in the area and take day trips on my own. However, I would definitely recommend staying in a larger city like Cirencester or Stow-on-the-Wold and exploring these and other Cotswolds towns in a more leisurely manner.

5 thoughts on “The Cotswolds, England”