The Trails of 1885 are historic sites that spread across the prairie provinces of Canada… Alberta, Saskatchewan, and Manitoba. Over the years I have been able to visit a few of these sites that are located in Saskatchewan. All of the following sites are easily accessible from Saskatoon and some can even be visited together in one day.

If you are travelling to or from Edmonton to Saskatoon then an easy stop along the way is Fort Battleford.

Fort Battleford was built in 1876 and was in use by the North-West Mounted Police from 1876 to 1924. Situated on a plateau, and located near two rivers, this fort offered excellent views and a means to escape by water if needed.

Fort Battleford was a place of safety for 500 settlers in 1885 during conflicts between the government forces and the Cree people living there at the time. It is also the site where Chief Poundmaker and six Cree men were hanged for their participation in massacres while trying to protect their land.

There are five buildings to visit filled with artifacts from that time period. You can tour this site in about an hour and you will find kids programs, a small gift shop, and guides on-site dressed in costumes to answer questions.

The next site I’ll mention is Fort Carlton. I loved wandering around this fort. It is definitely a bit out of the way, but with no crowds. and a beautiful setting, it was well worth it!

Fort Carlton was built by the Hudson’s Bay Company and was used from 1810 to 1870 to store and gather goods for other posts. Located along the North Saskatchewan River, and also accessible by land, it was in the perfect location for traders to bring their supplies. 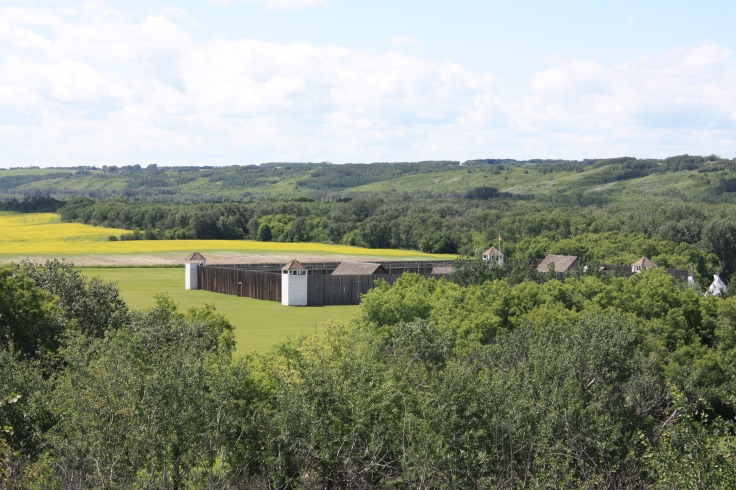 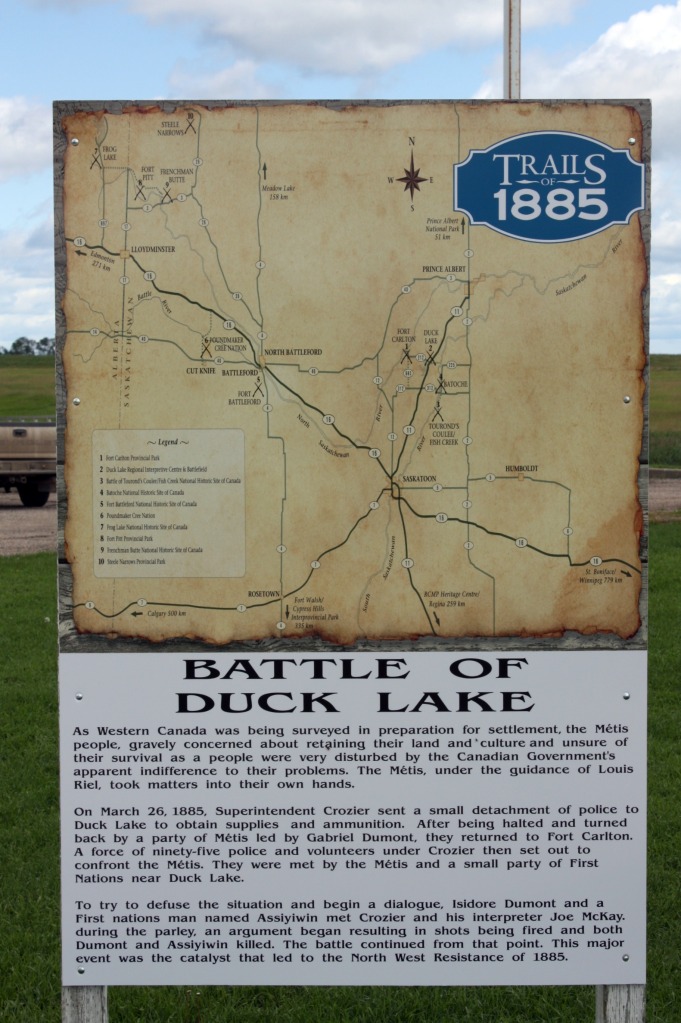 After this fight the fort was abandoned by the police and was then used by Gabriel Dumont and his men before they moved on to Batoche. The original fort was unfortunately burned down, but it has been perfectly restored with buildings, towers, and walls.

You can even walk along the top of the palisade walls to admire the spectacular countryside. 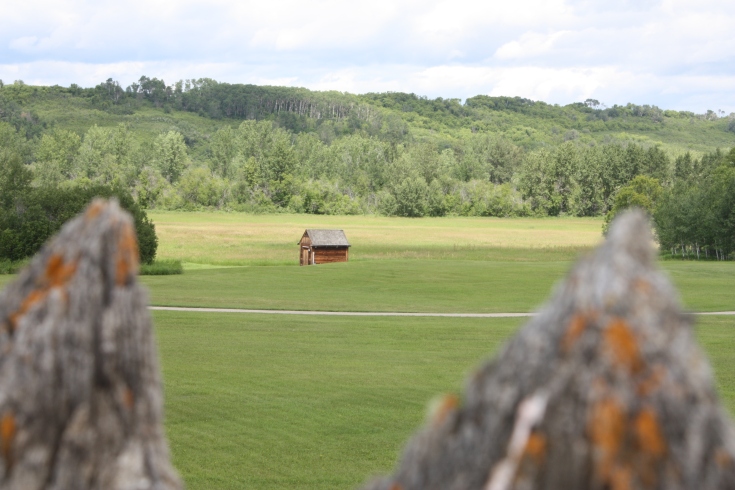 Fort Carlton has artifacts such as beaver pelts, buffalo hides, and birch bark baskets that you can see and touch. There is also a picnic area, hiking trails nearby, and a campground. 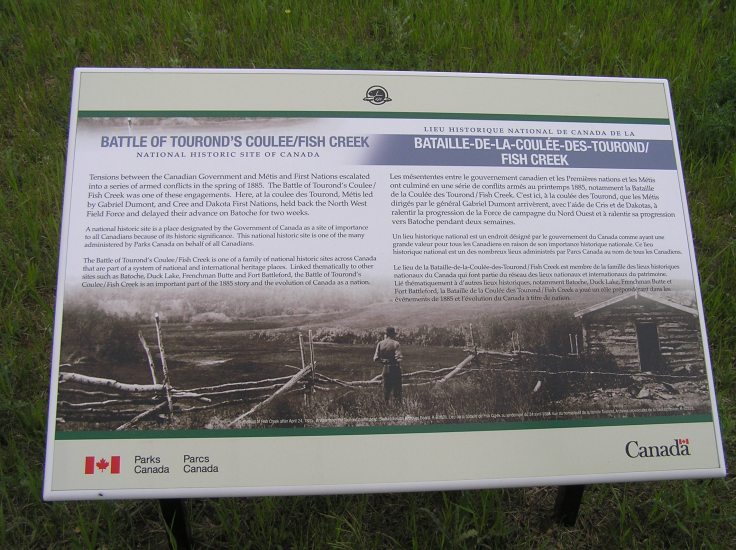 This location was where Gabriel Dumont, the Metis, and some Cree First Nations, fought and were able to hold back the North-West forces. 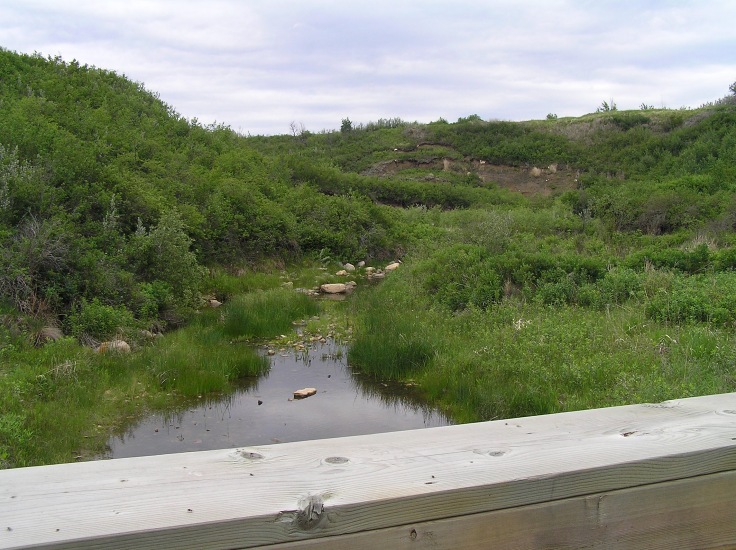 The Metis were outnumbered and ill-prepared at Fish Creek, however after both sides withdrew, it would be another two weeks before the North-West forces would make their way to Batoche. This gave the Metis time to prepare their defences at Batoche.

Batoche National Historic Site is the location of the largest battle between the North-West forces and the Metis people who were living in this area at the time. Louis Riel, the political leader of the Metis, had chosen Batoche as the base for his provisional government.

The battle that lasted from May 9 to 12, 1885, ended in victory for the Canadian government. The Metis, along with Riel and Dumont, were forced to retreat. Louis Riel was later captured and hanged for treason in Regina.

At Batoche you will find a video explaining the history of the site, interpretive trails throughout the area, guided tours, and a gift shop and coffee shop. Give yourself about 3 hours here to meander the pathways and soak up the history. Visiting Batoche National Historic Site is definitely worth the drive…you can’t help but get a feeling of what it must have been like to have lived and fought here.