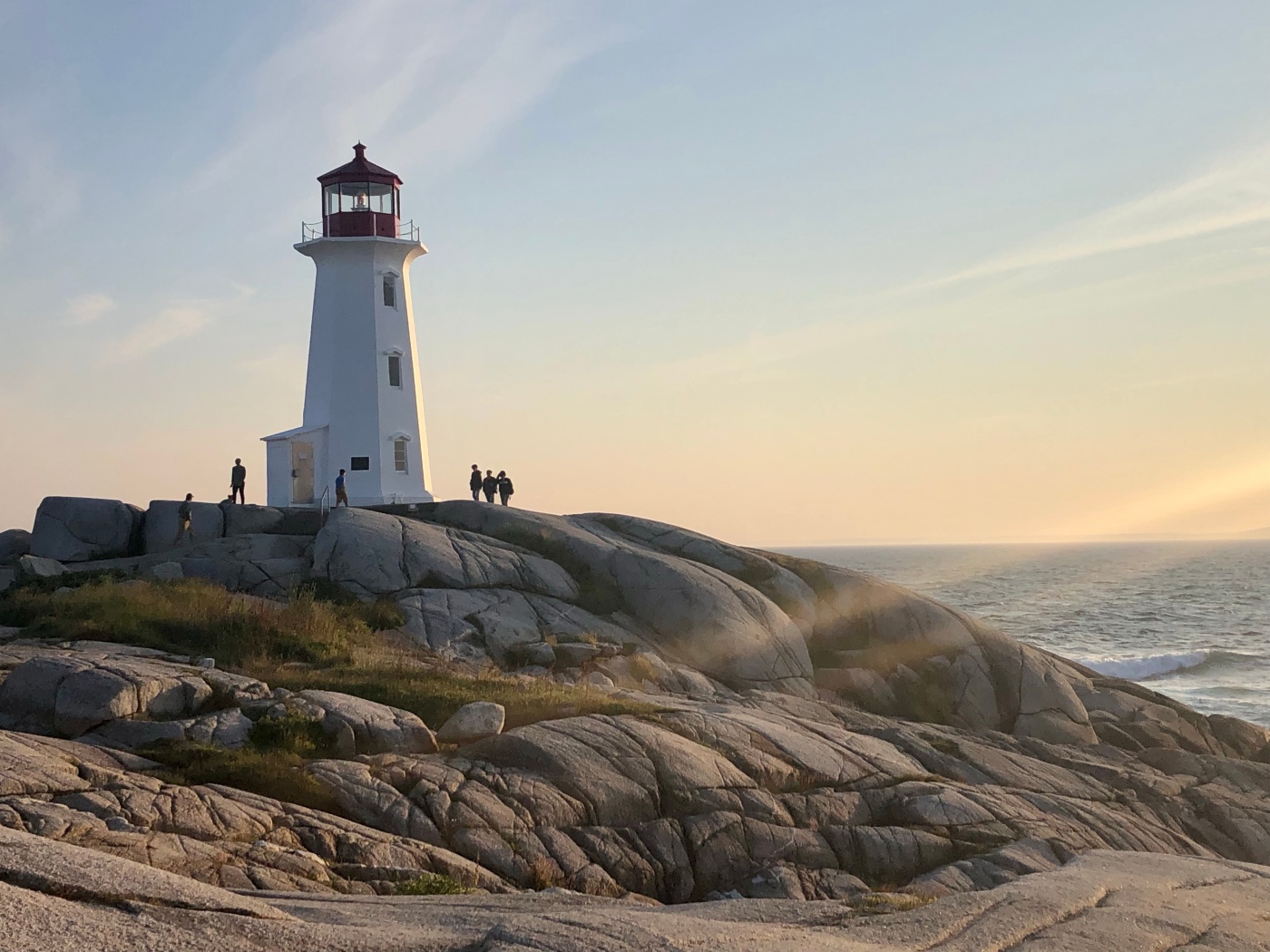 An easy day-trip from Halifax, the locations of Lunenburg and Peggy’s Cove are must-see sites on any trip to that area of Nova Scotia. We combined the two by driving first to Lunenburg and then winding our way back along the coast to Peggy’s Cove. This option worked well so that we arrived in Peggy’s Cove closer to sunset for some spectacular lighting.

Lunenburg was founded in 1753 and is one of only two UNESCO World Heritage Site urban communities in North America. The city still retains much of its original appearance and architecture from the 1800’s when it was a British settlement. The colourful buildings are a highlight of the town and there are more than 30 buildings on the Canadian Register of Historic Places.

There are many churches in Lunenburg and two that stand out are St. John’s Anglican Church that was built in 1763 in a Carpenter Gothic style, and St. Andrew’s Presbyterian Church built in 1828 which has a cod-fish weather vane on its spire. Both of these churches have some of the longest-running congregation histories in Canada.

Over the years Lunenburg has become known for its fishing port and shipyards. It was also the home of the Bluenose, a racing schooner that won numerous trophies during the 1920’s and 1930’s, and has been commemorated on the Canadian dime. Unfortunately the Bluenose struck a reef off of Haiti in 1946 and was damaged beyond repair. A replica, the Bluenose II, was made in 1963 and is available for viewing on certain times in dock at Lunenburg. Make time to visit the Fisheries Museum of the Atlantic where there is a great display about the Bluenose, exhibits about Lunenburg’s fishing history, and a special room honouring the local men who lost their lives at sea.

After you’ve spent a few hours in Lunenburg and perhaps have grabbed a bite to eat, head around the harbour to the other side to take a picture of the buildings that face the water…a zoom lens will come in handy here!

When you leave Lunenburg take Route 3 to get to Peggy’s Cove, this route will meander along the coast and take you through scenic villages such as Mahone Bay and Chester. When you get to Chester you can decide if you have time to continue on Route 3 or take Hwy 103 to the Peggy’s Cove turn-off.

There are plenty of places that you can stop along the way for dinner or you can also grab a bite at the Sou’Wester Restaurant located at Peggy’s Cove. If you’re lucky you will be able to get a window seat to admire the view as you have your meal. Something new at Peggy’s Cove is the accessible viewing platform that was opened in October 2021. It blends in with the rocks and coastline and is a wonderful place to take some photos if you don’t want to walk across the rocks.

The small village of Peggy’s Cove was established in 1811 when the government of Nova Scotia gave land to German families to settle here. The lighthouse, officially known as Peggy’s Point Lighthouse, was originally a small wooden building built in 1868 to help guide ships safely into St. Margaret’s Bay. It was rebuilt in 1911 into the shape it is today and was automated in 1958. This iconic lighthouse has become a landmark for this part of Canada…and after visiting and photographing this site there is no doubt why it is one of the most recognizable lighthouses in the world.

As you leave and head back to Halifax there is one more spot on the far side of the bay at Cranberry Cove Lookout where you can catch a view of this stunning location…I think it’s worth a quick stop.

This day trip from Halifax was definitely a highlight of our trip back east! If you would like to read about some things to do in Halifax then check out my blog with the link here.